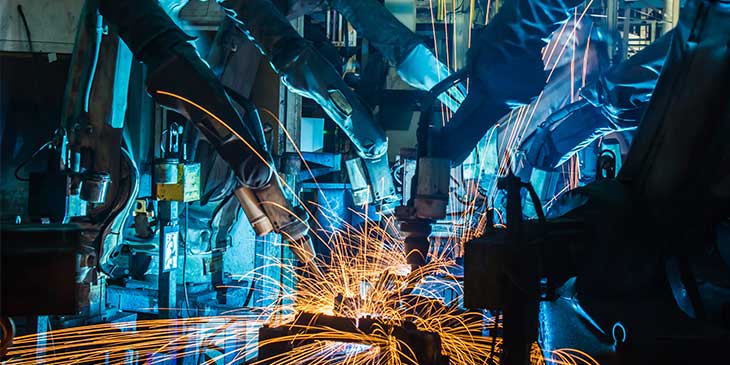 If you look across a modern factory floor, you’ll see as many glowing screens as gleaming robots. Many manufacturing systems and processes are now controlled by computers, and they’re also vital tools for the human workforce as well, as much – or even more – than their wrenches and spanners. Computers are typically used for tasks including:

Yet the factory floor can be a tough environment for a standard desktop computer – depending on the facility there might be extreme noise and light, moving metal, fatigued operators, electronic interference, and the chance of chemical spills.

These factors can make deploying virtual desktops on thin clients an appealing idea to many IT teams in manufacturing businesses. By centralizing most functionality in a central location and serving it out to local terminals, costs can be reduced without sacrificing functionality or productivity. Why? Ironically, the answer has far more to do with the hardware deployed on the shop floor than anything happening on the software side.

It doesn’t take that much hardware to run a virtual desktop – certainly not a high-powered desktop PC. Virtual desktops let you run ‘thin clients’ that have fewer components and are more easily ruggedized than standard workstations. When components such as spinning magnetic hard disks aren’t required, durability goes up and replacement costs go down.

Virtual desktops are available, with the same application software and configuration, on any thin client in the manufacturing space. This means that with a single log-in, an employee has access to their complete work computing environment at any workstation. This is especially handy for supervisors, inspectors and managers, who can continue their work as they move around the factory floor.

On the software side, replacing stand-alone workstations with virtual desktop workstations means IT has control over the configuration and installed software for every user’s environment. Applications can be fenced off from other users’ workspaces. The fact that the user environment is torn down at user log-off means that malware and attacks that depend on service persistence can’t work.

In the final analysis, the chief benefit of virtual desktops is that they allow workstations to be provided in many more locations around the factory floor than would be economically possible with more fully featured workstations.

It’s not that they’re zero cost: thin workstations must be deployed, and desktops must be served from a central location. And ruggedization, if needed, can add another layer of cost. But the initial purchase price and ongoing maintenance costs are much lower than those for traditional workstations.

Lower capex, lower opex, greater value to the organization: put them together and they’re a compelling argument for putting virtual desktops in your real factories.

Get the latest from Tech Updates from discoverpc.NET